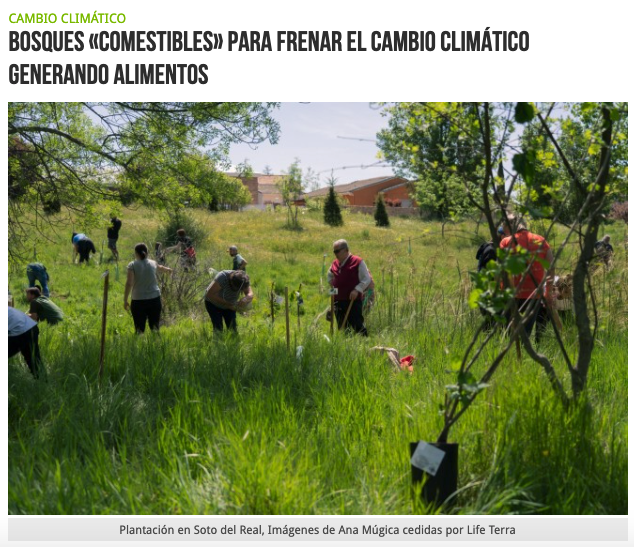 EFEverde published on 9 May that the Hope Acción Climática and Life Terra foundations launched the first “edible forest” in Soto del Real (Madrid), a project which, as well as helping to “improve air quality and curb climate change, will provide food for local residents and serve as a classroom for nature“.

The Soto de Real Town Council, Friends of the Earth and the World Biological Corridor have collaborated in the creation of the sustainable forest. The first weekend in May began with the planting of a hundred trees and shrubs including “walnut, hazel, olive, almond, apple, pear, fig, cherry, hawthorn, wild rose and aromatic plants“, reported EFEverde.

The objective set by the promoters is to plant around a thousand trees in several phases. But they also hope that the schools in the area will get involved in the creation of this unique forest. Collectives such as Friends of the Earth and the Chozas de la Sierra Cultural Association will be responsible for the care of the forest.

The benefits of this project are not only to generate healthy food, but also to “purify the air and water, improve soil quality and increase biodiversity“. It will also serve as a “nature classroom in which to learn about ecosystem services, the properties of plants and the importance of local production“, according to the news item.

Promoters of the Edible Forest in Soto del Real. Photo by Ana Múgica on loan from Life Terra

This initiative can be taken and reproduced in any space: a plot of land, a park, an old car park, a private plot of land, an abandoned agricultural field, etc. To turn neglected spaces into “municipal food forests” that constitute a “corner of biodiversity in which to enjoy and learn from nature and neighbourhood cooperation,” say Life Terra and Hope Climate Action.

«We are in the decade of nature»

Javier Peña, founder of Hope and one of the creators of HOPE! the series, called on citizens, governments and companies to “start restoring our common heritage because it is our greatest tool for a stable and healthy future,” he said.

“Together we can change consciences. The fact that so many children participated in the first phase of the forest shows the great interest of parents to have a local impact,” said Sven Kallen of Life Terra. His project is co-financed with European funds and aims to plant 500 million trees, one for every EU citizen.

Lawrence Sudlow, from Friends of the Earth, highlighted and valued the collaboration of many families “who know that what we are doing today is to plant the future“. The mayoress of Soto del Real, Noelia Barrado, stressed that “this is a clear example of teamwork to build a cleaner future for everyone“, the agency indicated.

Don’t miss all the latest news from Hope! la serie